Unless you have a man or a woman who does it for you, every boat owner will be familiar with the never-ending list of “wee jobs” that need done on your boat. I’m hopeful that there won’t be any major maintenance to be carried out this season, just the usual antifouling, cleaning, polishing and engine servicing. I’ve spent the last few days trying to shorten the list of “wee jobs” on Jess, still some left to do, but it’s going down, slowly.

Space is always at a premium on a boat and whilst there are a lot of cubby holes, lockers and stuff lockers on Jess, I am always looking for more. It’s always a good idea to make a thorough inspection of any boat you are invited on to to look for tips and ideas you can use on your own boat. Recently I was on another Moody 31 in Largs and I picked up quite a few ideas. The first was a very simple idea of creating a shelf in what most owners use as a stores locker. Essentially, it’s just a big locker that I stuff dry goods, food jars, condiments and the like. By adding a small shelf I have been able to better organise the foodstuffs and have freed up some additional space in a stuff locker behind the cushions which will gave more storage for visiting crew. 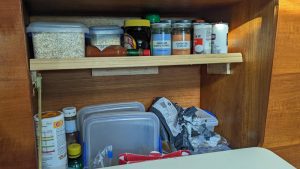 A job that I have been putting off is servicing the heads. Last season I had to twice replace the joker valve. This seemed a bit excessive as I would expect it to last at least a season. Nothing else to do but strip the whole thing down and investigate. I watched a YouTube video and studied the diagrams in the Service Pack.  It all looked pretty straightforward and I decided to strip down the whole thing and remove the plunger/flush mechanism and all the attached hoses.  Apart from the service kit you don’t need many tools or materials.

I checked the assembly the following day and needed to tighten a couple of jubilee clips to stop a wee leak.

There are four teak handrails on Jess’s coach roof and over the last seven years of maintenance I have simply rubbed them down and added a new coat of varnish.  This build up has begun to look quite bad, to such an extent that a crew member complained that they looked shabby. I sanded the handrails right back to the bare wood. It has been really cold for the past couple of days so I doubted whether a new coat of varnish would dry properly. Not really a problem, when the weather gets a bit warmer I will quickly rub them down and apply new varnish.

Next I turned my attention to the dodgers which are now eight years old. They still look OK but there was some staining from mildew and they are beginning to look a bit threadbare in places, but after a good scrub they looked much better and I hope to get one or two seasons out of them before they need replaced.

I have a car stereo on the boat for radio, music and podcasts. From what I remember I decided to spend a bit of money on it and go for a well known brand. I chose a Kenwood, no, not the mixer and home appliance company but a Japanese company responsible for some very respectable hifi and car audio. However, it’s an older model with CD, radio and Aux input but no Bluetooth and as now most of my music is streamed on Spotify I have to plug in a cable or use a Bluetooth adaptor – neither particularly reliable. A quick rake through Amazon and I see I can get what I need for less than the price of a good night out. in the pub

I have no idea who it was manufactured by, but for less than £30 it is absolutely brilliant. I had to do a wee bit rewiring but soon had it up and running.

Well, I am pleased to have  made a start to reducing the wee jobs list, a few more things I want to complete and will be returning in a couple of weeks to get them done.