Last week I spent a few days on board Jess working my way through a fair bit of maintenance and ticking off a few things on my wee jobs repairs list. With the weather being kind on the first couple of days I power-washed the deck and once it was dry, I gave the grab-rails a good coat of varnish.  I also managed to clean and reproof the sprayhood, the main sail stacker cover and mast cover.  Mainly through laziness, I have just been giving the washboards a quick rub down and varnish each year. Time to strip them right back. There are still a few jobs I can do before Jess is lifted out on the 25th April for polishing and antifouling.

I have been using a Lowrance Elite 7m chart plotter for the past eight years and it has served me well. 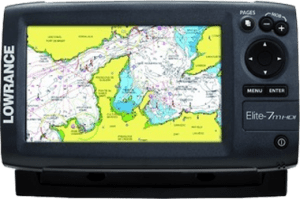 Whilst it is quite possible to add waypoints and plan a route, I prefer to use a laptop a mouse and charting software (Memory Map). For years I have been using an old Toshiba laptop. It’s old in every sense of the word, coming up for 12 years I think. It’s been upgraded as much as it can be, runs Windows XP, has just a small amount of memory, it’s slow and has to be plugged into the mains as the battery no longer holds any charge – which makes it pretty useless if I am anchored, on a mooring or want to plan at sea. I leave it on the boat (in a vacuum bag when it’s not in use). I have been thinking of replacing it for some time and this decision was made for me when now it fails to boot up properly. I have a small tablet which I use as a backup chart-plotter and that could be used to plan routes and waypoints and I have a laptop at home which I could use – but unlike the Toshiba, it’s quite new and was quite expensive. So, I decided to do a little research.

I’m no expert, but I have used Linux before (in fact I have a mini-pc running it which I occasionally use) and the plethora of free open source software makes it attractive. Sadly, much of this software available is inferior (well, shite) compared to the paid-for equivalents, but, there are some notable exceptions such as OpenOffice (which is every bit as good as Microsoft IMO) and  OpenCPN which is the charting software I will be using. Open source software can also be difficult to load and configure (as we shall see).

I decided to get a Raspberry Pi 400,  which is described as “A complete personal computer, built into a compact keyboard – everything you need (except a monitor) in one box”.  This is pretty much true as the Raspberry Pi 4B motherboard is built into a rather nice keyboard (but US layout), it comes with a micro-sd card with the operating system installed, a mouse, a power supply (again US) and an HDMI cable. I also bought a Wimaxit USB Monitor. There is a cheaper (and larger) version available, but this one can be USB powered, which is important if I want to use it away from shore power. I also bought a 128gb micro-sd card, so it is unlikely I will run out of disk space. The software is freely available and an absolute doddle to download using the Raspberry Pi Imager.  Once it is downloaded it is just a case of inserting the card into the keyboard, attaching all the cables and switching it on. After a few moments, the Operating System is loaded and an updating process is gone through (you need the Internet for this). 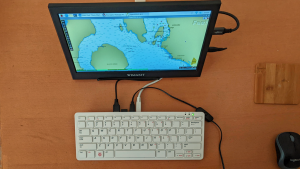 The OS comes installed with a few applications but it’s easy enough to add more such as OpenOffice  and OpenCPN,  using – Preferences>Add Remove Software option from the main Raspberry Pi menu.

I installed the charting software and downloaded charts from o-charts – which can be downloaded on to three separate devices (Windows, Linux or Mac or any combination) for just £20. To my annoyance, after downloading the software and charts I discovered that I could not load the charts into the version of OpenCPN I was using and needed to upgrade – bugger. After doing a bit of reading, I found that I was going to have to load the software from a different repository than the ones Raspberry Pi is using. Fortunately, there is a very easy set of instructions to follow on the OpenCPN website. If you don’t know Linux then you need to follow these instructions as a “root” – that’s the same as an “Administrator” in Windows – and the instructions don’t make it clear that you have to do this first in the Terminal Window by typing “sudo su” (without the quotes). The existing version of OpenCPN needs to be removed as well before you start, again using Preferences>Add Remove Software option from the main Raspberry Pi menu.

Apart from the ability to run the whole thing off the 12 volt supply, another thing that interests me is that there are two HDMI outputs from the computer. In theory this would mean I could run a cable to the cockpit instruments and attach this to a second monitor and use this for navigation. There are also a number of daughter boards available and one of these is an AIS receiver. At just over £59 I would be able to add an AIS overlay to the OpenCPN charting software – an awful lot cheaper than a tradition AIS receiver unit.  There are also boards which allow NMEA data from my existing instruments to be used within the OpenCPN charting software. 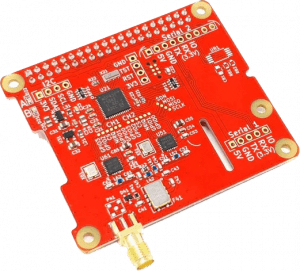 Well, after a bit of fiddling, I have it all working properly. I’ll be able to plan routes on the Raspberry Pi and transfer the GPX files to the tablet backup by Bluetooth. The Lowrance plotter is a bit more complicated in that the files need to be converted from GPX to Lowrance’s USR – but once done it’s just a case of saving it on a micro-sd card and loading it into the Lowrance.

However, some trialling and testing is needed before I go any further.