I booked Airbnb accommodation in Largs for a few days to get the annual cleaning, polishing and antifouling done on Jess. Although it adds to the expense, it is much easier than travelling back and forward each day and also if it rains I can stop for the day or return if the rain goes off. Last year, due to Covid restrictions, I had the work carried out by 360 Boat Services, but doing it myself saved a whole chunk of money. I say “me” but Alan joined me for a few days to help and we have managed to get through the work quickly.

Jess was lifted out last Sunday and I travelled through to Largs on Tuesday morning and got started right away on cleaning. Jess was looking decidedly scruffy with black streaks down the hull and rough looking, flaky underside. It would need some hard work to get her looking smart again

Rubbing compound first to remove dirt, stains and black streaks. A coat of polish and then a final coat of wax. Whilst I have a polishing machine I prefer to do it all by hand as I find working at height with a heavy machine pretty cumbersome and tiring.  I had allowed five days to get all the work done, but we rattled through cleaning and polishing the hull in a couple of days. 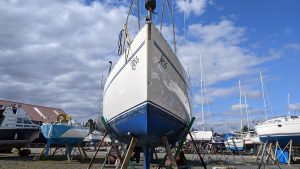 Either next season or the one after I am going to have to take the hull right back to gel-coat as it’s getting a bit lumpy and uneven after years of just a quick scraping and cleaning off loose flakes and debris – but as I say, another season.  360 Boat Services used International anti fouling last year and to be honest I felt the hull looked no better than when I use whatever happens to be the cheapest – this year it was “Precision” I shopped around and got it for £40 about half the price of “premium” brands – I object paying loads of money for something that is going to just wear off over the season. We got the hull scraped, cleaned and the anti-fouling done in a day. As a treat, we took the following day off and visited the various Larg’s hostelries.

There are probably half a dozen pubs in Largs and not one of them is particularly good but The Olde Anchor isn’t bad and we have spent some great times in The Waterside listening to bands and music. We found that the owner had invested in an old school jukebox – which was free, so we spent the afternoon there! 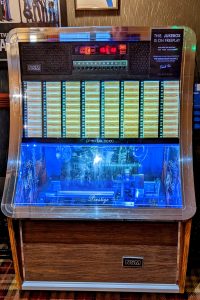 Alan travelled home and I spent Saturday morning finishing off, fitting anodes, replacing a split pin of propellor and generally tidying up. Saturday afternoon and evening saw the only rain of the week which had fortunately stopped on Sunday when Jess was launched and returned to her berth. Alan and I have planned a shakedown trip for next week, probably Lochranza, Portavadie and back to Largs before our first major passage of the season to Northern Ireland.