Before our first major trip of the season Alan and I planned a shakedown trip round the Clyde. I left Edinburgh early as I still had to get the headsail back on the boat and the winds were forecast to increase as the day went on. The staff in the marina office are great and one of them came down to help me as it’s not really a job you can do on your own.

We were having real trouble getting the sail on, so I popped up to Saturn Sails to ask someone to come down and look at the headsail foil as the sail bolt rope would get so far and then it became very diffcult to pull it up. It turned out that one of the foil sections has a small grub screw missing and this was causing it to twist trapping the bolt rope. The young guy who came down to have a look suggested that we just hoist it and as long as that was it for the season then he assured me that it would be fine. I’ll need to have it looked at when Jess is due for maintenance before the start of next season.

Our plans was to set off for Lochranza on Wednesday afternoon and spend the night on one of the moorings. However, passing Little Cumbrae Alan suggested that we head for Lamlash a little further down the Arran coast and with a steady F4 coming from the west it was the better option. Being the first outing we decided to err on the side of caution as far as amount of sail was concerned and we could probably have put out more. But, despite this, it was a fantastic sail and we covered the 17.5 miles in just over three hours.

Thursday morning saw another change of plan. We had planned to head for Portavadie but decided instead to make for Tarbert. The facilities at Tarbert were upgraded a couple of seasons ago and they are now amongst some of the best – great showers and toilets and a fantastic laundry. It’s a proper bustling wee  coastal town with a regular ferry across to Portavadie, a small fishing fleet and a range of pubs, cafes and restaurants and a well stocked Coop.  It has become our preferred destination on Loch Fyne. Whilst not raining, it was a bit damp when we set off and we motor-sailed for about an hour before the dampness lifted and the wind got up and we enjoyed another wonderful sail up Loch Fyne to Tarbert.

The harbour was quiet with a few visiting boats but still lots of space. We had decided to eat out in Tarbert not at Starfish, which is one of the best seafood restaurants you will find on the west coast and a real treat, but the small “Cafe Ca Dora” which is very reasonable and has the best Cullen Skink I have had (well, apart from my late mother’s). Tarbert main street is opposite the marina across the harbour, about a ten minute walk. Unfortunately it had started raining, but we hurried and after the cafe we were going just along the street to “The Islay Frigate” for a couple of pints and watch the football.

We had been really lucky with the weather so far and the winds had been very much in our favour and Friday morning was the same. Our final leg of the shakedown was across Inchmarnock Water and through Cumbrae Sound back to Largs. The wind was coming from the SW and I rigged up the boom preventer to stop it from gybing.  With just a reefed mainsail we sailed back at a steady 5 knots. As we were approaching Cumbrae the sun came out and it was a very pleasant sail back to the marina.

The shakedown threw up three or four wee niggles which I will get around to rectifying next week but apart from these and the crew being a bit rusty, everything is looking good. I’m off to Northern Ireland in a week with Alan and a mutual friend from Stornoway. We are really looking forward to it! 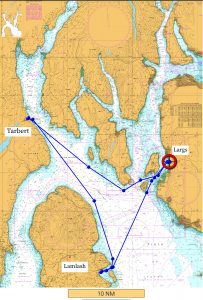