After a few days of warm dry weather, I’m tied up in Kererra Marina on a dreich, miserable morning. I have friends arriving on Wednesday from Edinburgh for a few days of sailing around Oban and Mull. The weather is forecast to improve over the next couple of days so hopefully we’ll have a good trip.

My brother in law Douglas, travelled through to Largs last Wednesday to help me through this first part of my Summer Passage from Largs, transiting the Crinan Canal and then heading north to Oban and the island of Kerrera.

We set off  around 3pm in a decent southerly and had a great sail across Inchmarnock and into Loch Fyne arriving in Portavadie just after 7pm. This would allow us a bit more time the following morning when we would be heading for the sea lock at Ardrishaig.  Tarbert is directly opposite Portavadie and would be my preferred destination for a number of reasons, it’s cheaper, it has a Co-op, a choice of pubs and places to eat. However, as we would be setting off early then facilities were less important. It was my birthday and after our tea we settled down to a few celebratory drams! 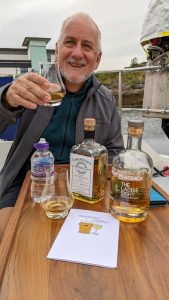 The start of the canal at Ardishaig sea-lock is just over 13nm from Portavadie and we off at 08.30. It was a calm, warm morning and a gentle motor up Loch Fyne had us approaching Ardrishaig just after 11 o’clock.  Normally the sea-lock is open and you just head straight in but on calling the harbour master he asked us to wait at the transit marina as there were three boats in the basin about to leave. As it turned out we sat there for well over an hour while we waited for another boat to join us in the sea-lock. It turned out to be a Swedish boat owned by Toyvo and Guivilla who we got friendly with over the transit.

The Crinan Canal is often referred to as “Britain’s most beautiful short cut” as it obviates the long trek round the Mull of Kintyre and being subject to tides and weather. Not that a trip around the Mull isn’t beautiful and interesting, it is and it’s a passage I have often taken and has many delightful islands and wonderful  scenery.  The Crinan Canal does offer magnificent scenery and wildlife, relaxing sailing and great attractions if you venture from the canal.  It can be covered in six hours, but I don’t see the point in that particularly when you can have up to four days to cover it and enjoy the fantastic peace and quiet at the various stops along the way. Once you leave the canal at Crinan it’s a short 25 nm sail to Oban or an even shorter one to Ardfern.

There are just four locks and one swing bridge to negotiate on the way to Cairnbaan and usually the canal staff will assist you through these. For the remainder of the journey I had contacted one of the canal pilots you can find on a list on the canal’s website. Oliver, a young student from Crinan doing this as a summer job to finance university, would join us at Cairnbaan the following morning.

The Witch on the Broom

Tied up at Cairnbaan we heard a knock on the coach-roof  and I popped outside to see Guivilla from yacht Kvasthilda which had travelled from Ardrishaig with us.  They were also heading for Kerrera and she, as navigator and planner, was a little concerned about passing through Dorus Mor, Corryvreckan and heading up The Sound of Luing, in particular the tidal streams and tidal gates in the area. These waters can indeed be very treacherous and it’s important to choose your days, plan carefully and study local guides and then you can minimize the risks. The weather had been fairly good to us so far and the forecast looked very good with a decent westerly wind. Studying the tidal stream atlas and advice from the Crinan Boatyard website I had worked out that leaving Crinan around 11.30 would give us the quickest, easiest passage and I told Gunilla just to follow us out. She also asked if I would have a look over her passage plan to Kerrera and invited us for a drink on their boat when we arrived in Crinan – of course we accepted! 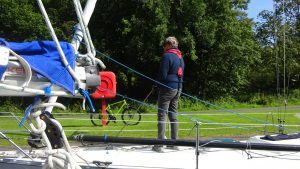 The canal was really busy from Ardrishaig and I expected it to be just as busy to Crinan. For the first time in a couple of years, West Highland Week has returned and this year is based around Oban and Mull. Whilst most of the fleet (some 60-70 boats) would be heading around Kintyre, some would be transiting the canal, this might slow our progress but we were in no hurry.

Oliver arrived on time at  nine and was very efficient and helpful.  There are eight “up” locks from Ardrishaig and seven “down” (including sea-locks). The down locks are far easier than the ups and having done four from the sea-lock  we were glad to get to lock nine. I think the most beautiful section of the canal is between lock nine and Bellanoch Marina where the canal cuts through thick woods and lush vibrant banks. 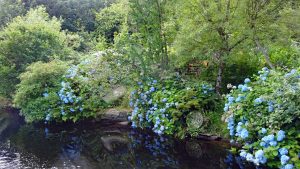 We were passed by nine or ten boats on the way to Crinan and arrived just above lock 14 at after half past two.  We moored up at lock 14 above the basin, where there is quite a long pontoon on the starboard side, with Kvasthilda tucked in behind us. 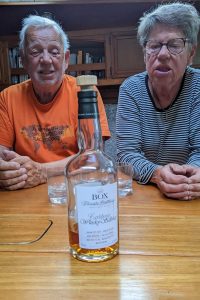 We spent a great evening with them on their wonderful boat Kvasthilda,  a Wasa Atlantic at 15 metres or 51 feet long (although Gunilla admitted that she often declared that Kvasthilda was just 45 feet long) she has plentiful accommodation and is beautifully finished inside and out. The couple had been at sea for over 60 days having left Sweden and making their way down the coasts of the Netherlands and Belgium before passing round Land’s End to Ireland and on to the Clyde where they used the Crinan Canal to Kerrera. The final part of their voyage was to be through the Caledonian Canal before crossing the North Sea back to Sweden. Gunilla’s passage planning was perfect.

They are a wonderful couple and fantastic company, telling stories of their numerous voyages to the Mediterranean, Syria, Lebanon, Saint Petersburg, the Danube and many, many other destinations. They really are a well travelled couple. It was great hearing them seamlessly switch from Swedish to English as they translated, disagreed and discussed with playful and mischievous smiles.  We laughed and drank drams well into the evening getting back to Jess just before midnight. Now you may be wondering why the title of this part of the blog is “The Witch on the Broom“.  in Sweden , Kvasthilda is the Easter Witch of Swedish Folk Tales. Toyvo playfully told us that many people think his boat is named after Gunilla. 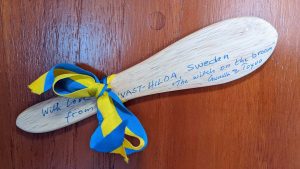 This is a Swedish butter knife given to me by Toyvo and Guivilla.

We left Crinan sea-lock at 11.30 and with just the mainsail up, we sailed through a benign Dorus Mor and on through the Sound of Luing past Seil Island and north through Kerrera Sound. Toyvo and Gunilla came aboard Jess when we arrived on Kerrera and we had a small farewell dram. It was wonderful meeting them, we have exchanged details and I really do hope we can stay in touch. 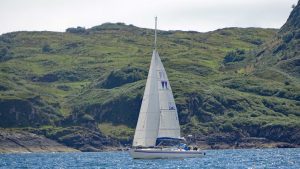 My brother in law took the train from Oban to Glasgow and then on to Largs to collect his car and I took a trip across on the wee ferry and visited Tesco for a few bits and pieces.

It’s cleared up a bit now so I am going to set about a few things outside and then start tidying up for friends arriving tomorrow. There’s some sort of bash organised in the marina’s boat shed tonight as part of West Highland Week and I might wander up there later – as long as the rain doesn’t start again.