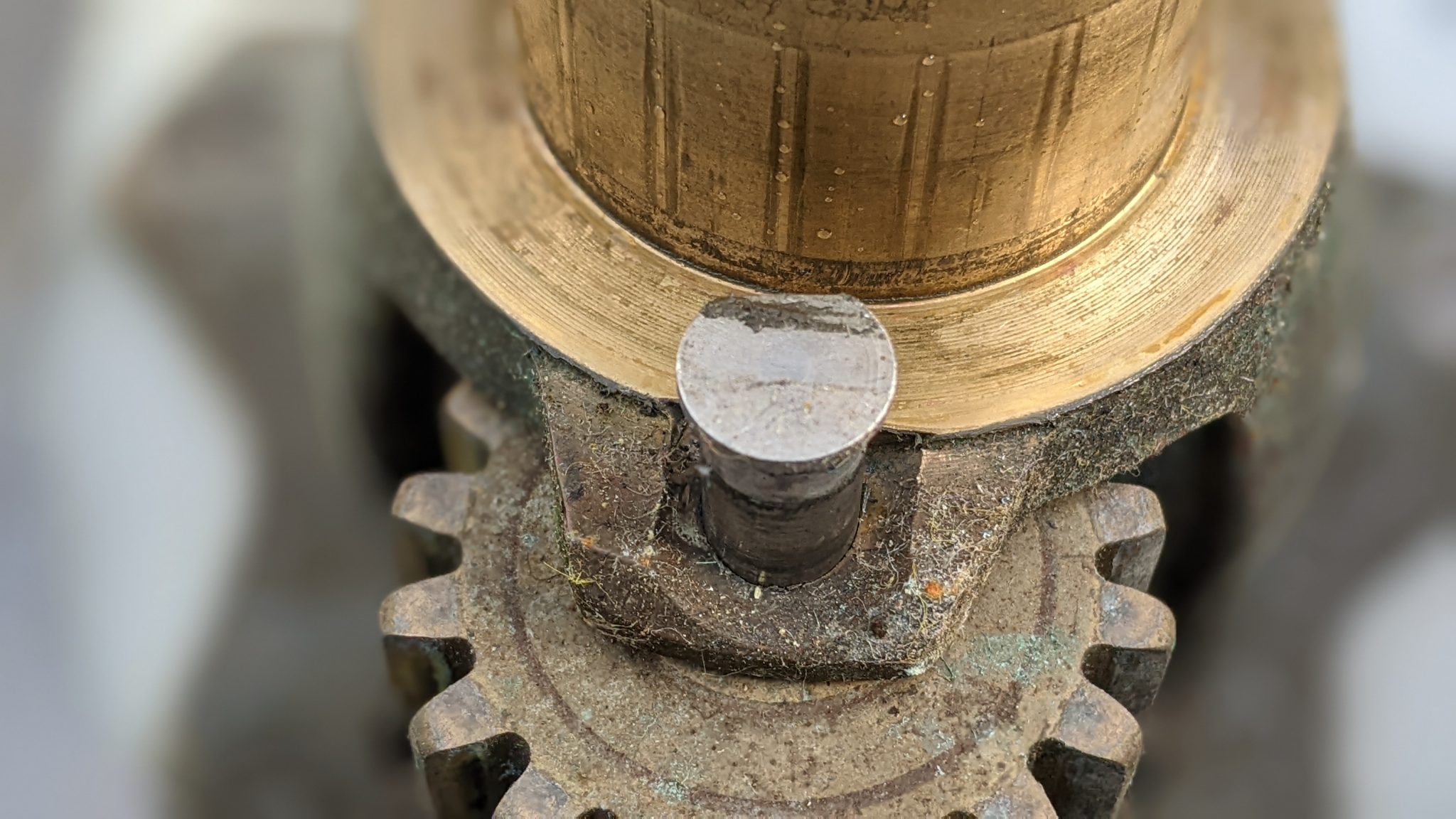 Winching is one of those words which can mean something completely different in Scotland to the rest of the UK just like messages, chum and jobby. In most of Scotland, winch means “to date or court” and even “kiss with tongues” in some parts.

I have two main winches on Jess for the genoa sheets – and there are another two smaller ones under the spray hood which are in good working order. I noticed last time I was out that the main starboard winch wasn’t working properly and at times it was just “free wheeling” and not holding the rope, a sure sign that it needed some maintenance.  With being so close to leaving on my summer passage the following, I was reluctant to take them apart, worrying that I might not get them back together again or having to send for spare parts. Looking at exploded diagrams of winches, they looked incredibly complicated with lots of small parts. It turns out that mine are fairly simple and straightforward to service.

I was in Scott’s in the marina last night along with another Moody owner, Mark, and a couple of his friends. They persuaded me that it wasn’t that complicated and I could easily do it. It was a beautiful sunny morning and I made the decision just to get on with it. Remarkably few tools are needed, just a cross-head screwdriver and flat blade screwdriver or knife for poking and prising and a wire brush (or toothbrush).  Some consumables:  degreaser (white spirit would do), some light machine oil or PTFE lubricant and some winch grease. Fortunately I had all of this on board. 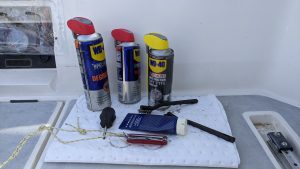 There are a couple of parts that might need replaced; the “pawls” – wee levers which stop the winch from turning backwards and small springs which hold the pawls in place. The pawls themselves can get clogged up with salt and hard lubricant and the spring is then unable to move the pawl in and out from the cogs. The spring itself is quite small and can easily ping out or it can be broken. 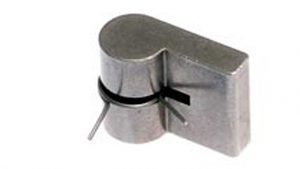 Luckily, on dismantling the winch all the bits looked in great condition but with the pawls clogged up and not springing back – which was the reason why the winch was free wheeling – so no need to visit the chandlery to look for spare parts!

With the winches positioned where they are, there was a good chance that a wee bit might ping out and bounce on to the deck or worse, into the water. I found a basin in one of the lockers, cut a hole in the bottom of it and slipped it over the winch so that if anything did come off then it would be caught in the basin. If I had had a cardboard box, I would have used that.

There’s a single circlip on the top which holds the top plates in place and once this is removed, the outside casing can be slid off revealing the shaft and cog mechanism. I took care removing the drum, making sure that the pawls remained in place. I gave the pawls and inside the drum a good spray with degreasing fluid and put it to one side. Once the drum is removed, it is a simple job to slide the roller bearings and the drum washer off the shaft. Once again, I gave the roller bearings and washer a good spray with degreasing fluid and put them to one side.

Next I removed the pin holding the cogs at the bottom of the shaft in place and took great care removing the two cogs as the smaller contains pawls and springs which I wanted to keep in place. Take the two cogs apart, good spray and put to the side. Finally, there’s a small plastic shaft key in the side of the shaft which once removed (poked out with a knife blade) allows the shaft to move up and down and also, if needed, removed. Spray with degrease and put alongside all the other parts.

Time to put everything together.

It’s important only to use light machine oil or PTFE lubricant on the pawls, pawl springs and cog surfaces they come into contact with to prevent grease clogging up mechanisms again. All other surfaces were smeared with a light coat of winch grease. I reassembled everything in the reverse order I had taken things off, finally securing the circlip and giving the outside a good polish! 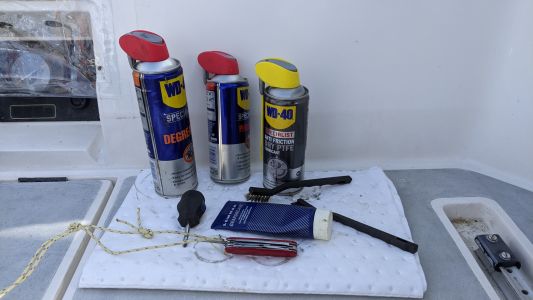 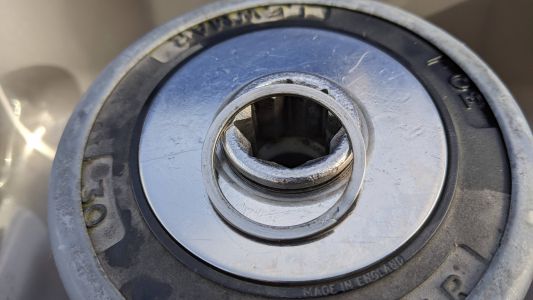 The circlip holds the top plate(s) on 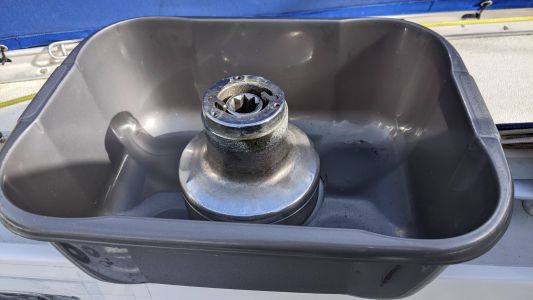 A hole cut in a wash basin and this slipped over the winch to catch any pieces that fall out. 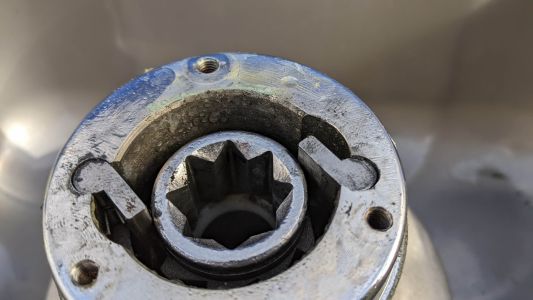 Pawls t the top of the drum. 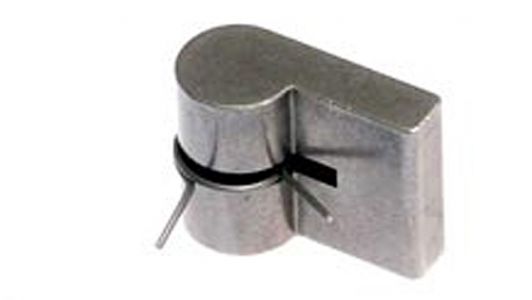 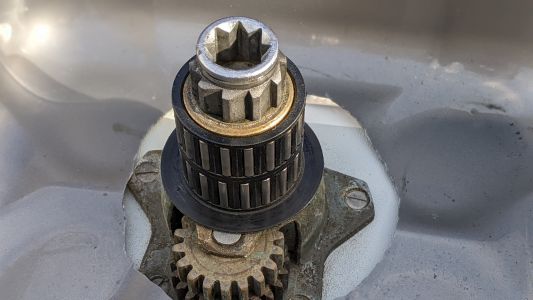 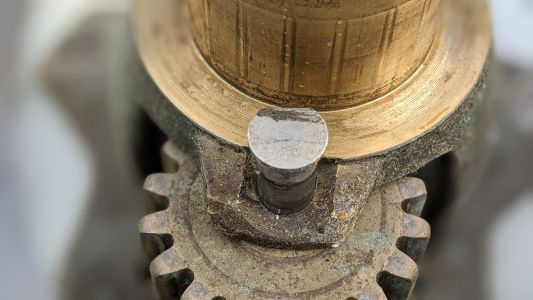 Removing the pin holding the cogs in place. Take care removing cogs to keep pawls and springs in place. 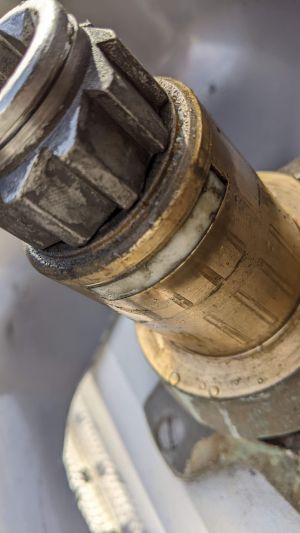 Shaft key which holds the shaft in place. Carefully remove to allow cleaning. 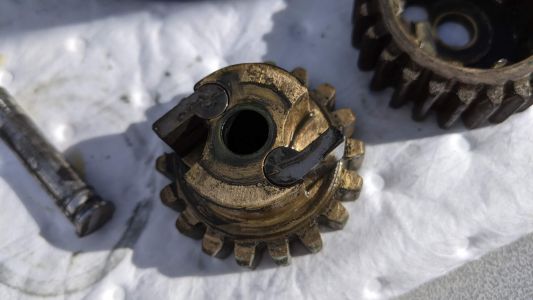 The pawls are clogged up stopping the spring doing its job. 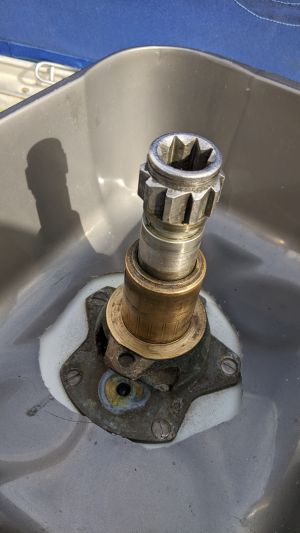 Shaft stripped of components ready for degreasing and cleaning. 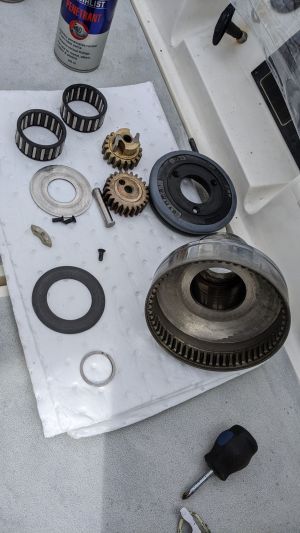 All components degreased and cleaned ready for reassembling and lubricating. 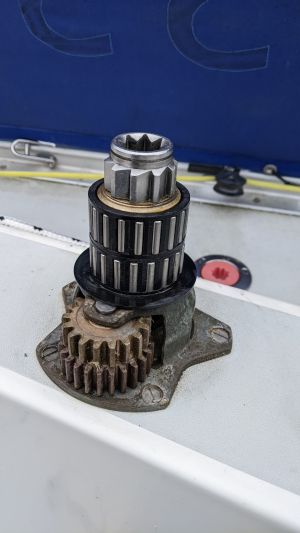 All components reassembled in reverse order of removal. 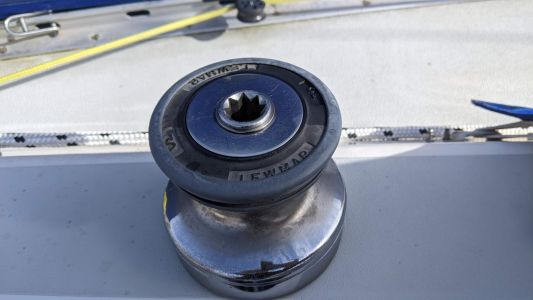 Re-assembled and a final polish