West Highland Week hasn’t been held for two years now, and it just so happened that it coincided with friends Mairi and Rob joining me for a few days sailing the Sound of Mull. WHW is unique in that during the week it moves from base to base with racing and competitions at each new base. Unfortunately, they planned to use some of the marinas I intended visiting and with approximately 70 boats taking part, moorings and pontoon space would be at a premium. I adjusted my plan to avoid them!

It had been a dreich, miserable couple of days with constant drizzle and rain but the forecast looked to be improving.  Mairi and Rob arrived a little later than they had planned having had a problem with a tyre on the way. Fortunately, the weather had improved slightly by the time they arrived. We spent the evening on the boat and chatting about the following few days. There wasn’t a great deal of wind forecast for our first day so I decided that, since we would be mostly motoring, we would head for Salen Jetty first and with the winds looking to improve, it would give us the chance of sailing to Tobermory and then back down The Sound of Mull to Lochaline and Kerrera. 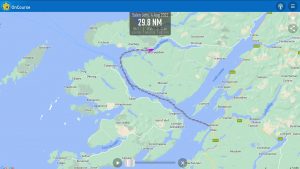 It was a bit damp and dreich when we left Kerrera but it started to clear as we headed north.  We were between spring and neep tides so there wasn’t a great deal of tidal stream either for or against and we made good progress, even managing to get the sails up as the wind increased. A bit of turbulence and tidal stream as we passed between Lismore Lighthouse and Lady Rock.  Lady Rock is a skerry to the SW of Lismore and is the scene of an ancient tale.

In 1527, Lachlan Maclean of Duart (Duart Castle) decided to murder his wife, Lady Catherine Campbell after she had many attempts at poisoning him. She was a sister of Archibald Campbell, 4th Earl of Argyll. One night he rowed out to the rock at low tide and chained her there to drown. The following day he saw that she was gone and immediately sent his condolences to the Earl and indicated that he intended to bring his wife’s body there to Inveraray Castle for burial. On arrival, complete with a coffin and a group of his men, he was taken for refreshment and found his wife, Catherine, sitting at the head of the table.   Unbeknown to Maclean his wife had been rescued by passing fishermen and taken to Inveraray. Later, Maclean was murdered in his bed in Edinburgh by Sir John Campbell of Calder, another of Lady Catherine’s brothers.

By the time we turned east into Loch Sunart there was a decent breeze an we had a great run down the loch. Loch Sunart is a beautiful loch between the Morvern and Ardnamurchan peninsulas and is always a joy to sail. Salen Jetty, about half way down Loch Sunart,  is one of may favourite destinations on the West Coast. The marina is situated at the entrance of Salen Bay and has space on the pontoons for eight visiting boats (more if they are rafted) and four swinging moorings. The marina is expertly run by Jan and Mark and it’s always a pleasure to see them again. There’s an old pier, constructed around 1830 as part of an overland route to Ardtoe pier to enable small boats to avoid the trip around Ardnamurchan Point, where you can go alongside to fill with fuel.  There’s one shower and an additional toilet – both spacious and impeccably clean. There’s a fantastic local shop and café just a few metres from the marina, which stocks groceries, fruit and vegetable, local produce, household goods and beer and spirits. My nephew managed to get a hard to find Ardnamurchan whisky here.  The café makes great bacon rolls in the morning and serves wonderful coffee! There’s a nice hotel about a fifteen minute walk from the marina. 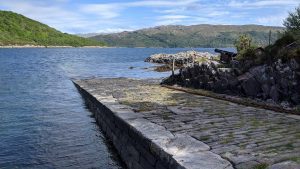 On our passage through the Sound we passed what seemed to be half of Cal Mac’s fleet of ferries: Isle of Lewis, Isle of Mull, Coruisk, Lochnivar, Loch Frisa (the newly acquired ferry) and the ferry with the streamlining of a brick, Clansman. It was a really interesting journey as we also passed some of the West Highland Week fleet, an unusual cargo vessel Inverlussa – which wouldn’t look out of place in a cartoon –  and the magnificent old gaff rigger Bessie-Ellen. There are also numerous ruined castles on either side of the Sound, more of that later.

The weather had improved a lot the following day when we took the short trip from Salen Jetty to Tobermory. Once more, there wasn’t a great deal of wind, but we did manage to motor/sail most of the way. As fate would have it, the wind blew up as we entered the harbour and mooring was fun. Tobermory was built as a fishing village in the late 18th century and is the main town on Mull. It is a popular destination for cruise ships and there was a visiting “boutique” cruise ship anchored in the bay when we arrived. It left later that evening and was replaced by another shortly after. 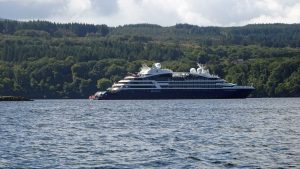 There is reputed to be the wreck of a Spanish galleon somewhere in the mud at the bottom of the bay. The ship was part of the defeated Armada of 1588 and was fleeing the English fleet when she anchored in the bay to take on provisions. Following a dispute over payment strangely, the ship caught fire which caused the gunpowder to explode. She was supposed to have been carrying millions of gold coins when she went to the bottom but no-one has ever managed to find any significant treasure.

We had a fantastic sail down the Sound to Lochaline. We left Tobermory around 10.00 and I hoisted all sail as we were leaving Tobermory Bay and put the engine off and it only went back on when we were entering Loch Aline. Jess isn’t the best boat for sailing into the wind and can often only get as close as 40 degrees, she sails well when the wind is on the beam and she is brilliant on a run. With the wind behind us we romped down toward Loch Aline at 7.5 knots! I had a bit of a struggle getting the main down as the wind had increased but soon we were in the shelter of Loch Aline and heading for the marina at Lochaline (pronounced the same way). There were a few boats in but I managed to find a berth facing into the wind – keeps the cockpit dry.

The final part of our journey was the short passage from Lochaline back to Kerrera. There was a little wind and we drifted down towards Oban. I had to restart the AIS so there are two parts to the passage route:

The whole area around Mull, Morvern and Ardnamurchan is steeped in history, much of it bloody, violent and confrontational. The main clans in the area were the Maclean, MacLaine, MacKinnon, Macquarie, MacInnes and MacDonald and numerous ruined castles still exist as well as Duart Castle, the seat of power of the McLean Clan,  which is still in use and dominates the southerly entrance to the Sound of Mull. Other castles we passed were Dunollie Castle which is at the entrance to Oban Bay, Ardtornish Castle at the entrance to Loch Aline, Kinlochaline Castle in Loch Aline, Caisteal Nan Con (also Killundine Castle or Castle of the Hounds) on Morvern and Aros Castle or Dounarwyse Castle near Tobermory.

I am stopping off on Kerrera for a few days with a few some jobs to do –  tidy up, laundry (Kerrera has the best laundry on the West Coast IMO), a bit of shopping and a few maintenance jobs. This weekend coming, weather permitting, I am heading back up to Lochaline for a muster with fellow Moody owners, a BBQ and a wee celebration for the Scottish Moody Owners Captain Hamish’s birthday. I’ll be staying there for the weekend and returning to Kerrera for Monday possibly Tuesday before crossing to the transit marina in Oban Bay to meet up with Alan and getting ready for our passage to the Small Isles and rounding Ardnamurchan for Skye, oh, and getting a haircut!