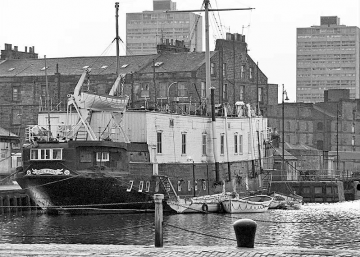 Recently, a post popped up on my FaceBook page about TS Dolphin, a training ship berthed in Leith Docks from 1944 to 1977. TS Dolphin was attached to Leith Nautical College which was open from 1855 (as Leith Navigation School) until 1987 when it closed. My dad was a lecturer in Seamanship at the college from the late 60s until the early 80s. Initially on TS Dolphin and then at a purpose-built college on Milton Road in Edinburgh.

I have wonderful memories of my dad taking me to The Dolphin as a young boy during the holidays or times when there were no cadets on board. I vividly remember the tarry, ropey, oily smell mixed with the aroma of the cook’s freshly baked rolls and bread. There were some wonderful model ships, a ship’s wheel, bells, ropes, pulleys and a whole load of other stuff that kept me occupied whilst dad went and did whatever it was he was doing. 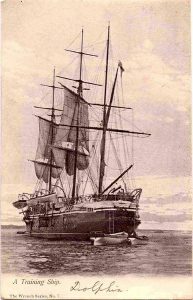 HMS Dolphin was one of two “Composite Screw Sloops” – a wooden hull over an iron frame. She was a three masted barque with an auxiliary 2-cylinder 720hp “back-acting” steam engine, driving a single screw propeller giving a maximum speed of 11.3 knots under power. Forty-seven metres in length (157 feet), a beam of 9.75m (32 feet), a draft of 4.26m (14 feet) and a displacement of 925 tonnes. She was armed with a variety of guns.

HMS Dolphin was the fifteenth ship to be named Dolphin and was designed by Nathaniel Barnaby. She was laid down in 1881 at Cleveland Dockyard (Sir Raylton Dixon & Co) Middlesbrough. The hull was planked with four-inch mahogany covered by a two-inch layer of teak, with the hull up to the water line, sheathed with heavy gauge copper. The main deck forward was ten inches thick and the ship was reinforced with cast iron, both fore and aft, ready to take the large calibre guns. HMS Dolphin was launched on the 9th of December 1882 and was commissioned in 1884 at Sheerness with a complement of 115. Her sister ship HMS Wanderer was built in the same yard and launched on 8th February 1883. In 1885 she was attached to the Mediterranean Squadron until the end of the 19th century.

In 1885 members of her crew formed a naval brigade at Suakin in Sudan and fought in The Battle of Torfek on 22nd March 1885, an engagement which only narrowly avoided becoming a military disaster. Lieutenant Montague H M Seymour and five of the ship’s company were killed in action when one of the Gardner Guns was overrun.

Between 1888 and 1896 when she was “paid off” at Sheerness, she saw service in Egypt, India and Australia and dealt with the remnants of the slave trade. On 21st January 1893 under the command of Admiral Christopher Craddock, HMS Dolphin rescued the crew of the Brazilian Navy corvette, “Almirante Barroso”, which had wrecked on the coast of the Red Sea near to Ras Zeith. Coincidently, Barroso was launched in the same year as HMS Dolphin.

Just before the turn of the century her engine was removed and she was used as a sea-going sail training ship, stationed at Portland taking naval cadets on four month sailing trips. In 1907 she was de-rigged and transferred to Portsmouth. In the early years of the submarine branch of the Navy, HMS Dolphin was used as a depot ship along with HMS Mercury and was later moved from Portsmouth to Gosport. HMS Dolphin remained in this role as the first submarine depot ship until 1924 when she was decommissioned, giving her name to “HMS Dolphin Submarine Base” at Gosport. 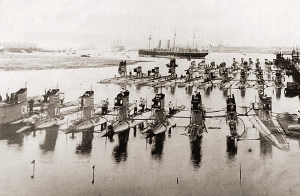 HMS Dolphin (Shorebase) closed as a submarine base in 1998. This images dates from  around 1922 when Dolphin  was the submarine depot ship.

In March 1925 Dolphin was bought by Lieutenant Commander J. M. Robertson, a Glasgow ship-owner and Sir Donald Pollock a physician, industrialist and philanthropist, with the intention of converting the ship into a nautical museum based in the West Dock next to HMS Claverhouse. They arranged for her to be towed from Portsmouth to Leith and she set off on her journey north on Tuesday 21st April towed by the tug “Hullman of Hull”. On Wednesday 22nd in heavy gales they were forced to put into Yarmouth for shelter. The following day they set off once again, but unfortunately whilst passing the Farne Islands in heavy seas, Dolphin sprang a leak. They pressed on and entering the Firth of Forth on April 25th 1925 she encountered extremely bad weather and started taking on large amounts of water. The following day, in the vicinity of Inchkeith Island and with her stern under water, the tugboat crew decided that for safety sake they beach her off Fisherrow, just seven miles from her destination. She lay here for eight months before eventually being taken to Rosyth for repairs and in 1928 she was moved to East Old Dock.

In 1944, Dolphin changed use once again, to become a Merchant Navy Training Ship. Captain Salvesen, Mr Tom McPhail and Mr J. J. Robertson agreed with Leith Nautical College that she should become a pre-training sea school for cadets and deck boys. It was then she became “Training Ship TS Dolphin”.

In 1950 the college opened a class for cooks; the ratings who came for this training sat the “Ships’ Cooks and Higher Certificates”. There were three main courses on the ship. One was a course for Cadets, open to boys between 15-17. Another course for catering and one for deck boys. The boys who entered those courses must have been educated to a fourth year Secondary School standard and be physically fit. All the boys, irrespective of their course, were given training in boat work, swimming and lifesaving and in the latter two the Dolphin had a long and proud record. The ship gained many trophies and cups for their prowess in the aquatic sphere. Over 240 boys passed through TS Dolphin every year and the total of boys who have trained on the ship was over 4000.

In 1969 TS Dolphin was moved to her final berthing place in the West Old Dock (there’s a Holiday Inn Express built on the spot where she was last tied up). Plans for a new Leith Nautical College and Halls of Residence at Milton Road East were announced in December 1974 and TS Dolphin was deemed surplus to requirements. She was sold and on Monday 4th July 1977 she was towed to Bo’ness, beached and burned out for the copper cladding and brass. A sad ending for a wonderful old ship.