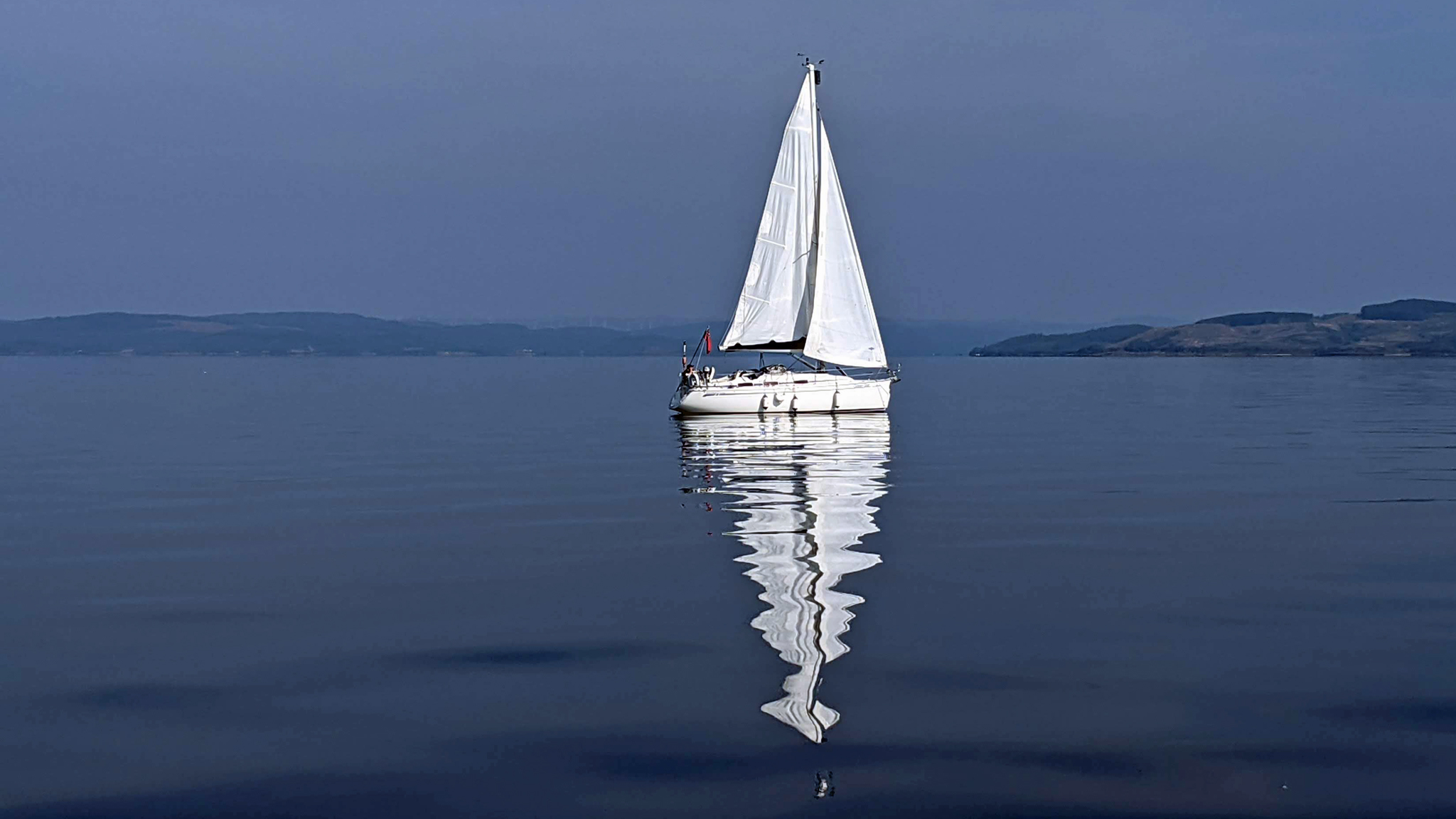 I say sail but it’s been more like drift.

With the weather forecast for the 2nd week in September looking good, settled, and warm, I decided that a few days away on my own was just the ticket. It had been just over a week since Alan and I returned from our passage to Northern Ireland and The Crinan Canal and I was hankering after another trip whilst the weather was good.. I planned to visit Tarbert, Otterferry, and Portavadie. 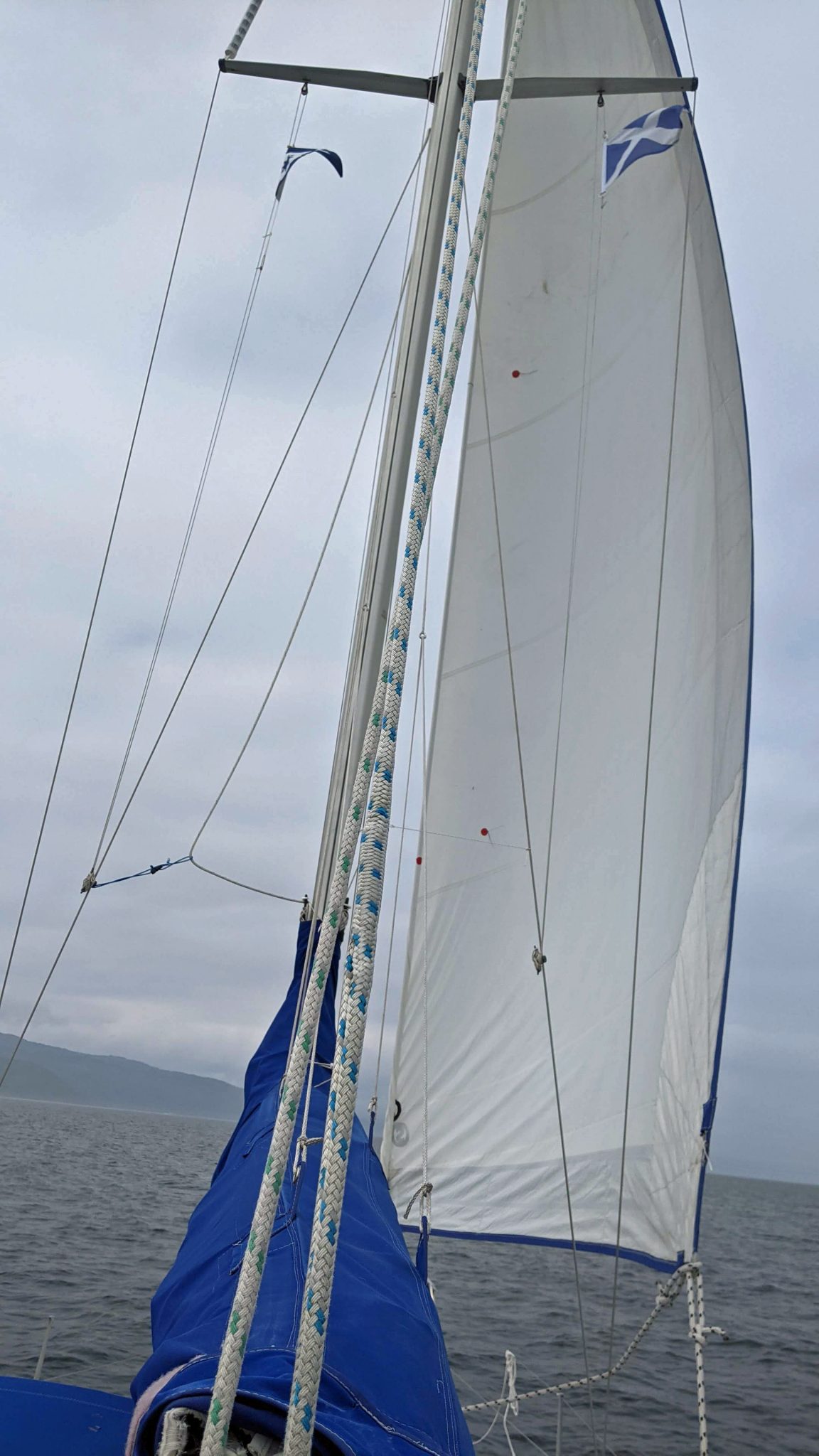 I drove through to Largs on Monday morning and spent the day getting Jess ready and doing a couple of wee maintenance jobs. For me, the most stressful part of solo sailing is leaving and going on to a pontoon. When you are out on the water, the autohelm can take care of the steering whilst you tidy stuff away after leaving or prepare for arrival. Similarly, the autohelm is such a useful piece of equipment when putting up the sails or tacking. However, the confined space of a marina is where I get a wee bit anxious.

I have a technique that I use for coming alongside a pontoon finger. I slowly make my way into the finger and gently nudge the pontoon with the bow (I have a bow fender). I jam the bow against the pontoon put the boat in forward and the tiller hard over toward the finger (steer to starboard on a port finger and vice-versa). This holds the boat against the finger and allows me to get off and sort out the lines. However, this only works on a finger, if it is one long pontoon then it won’t so I am keen to try out another technique. This one involved a line (10mm is enough for my boat) attached to a cleat halfway up the boat then run through the back fairlead to the headsail winch. Again come alongside slowly and this time lasso the cleat at the end of the finger and quickly pull the slack in on the winch and make fast on the cleat. Engage forward gear and the boat will slowly come alongside and stay put whilst you attend to the lines. Leaving the pontoon is just the reverse.

Before I left Largs, I needed to get some diesel – this would be the 1st test of my new technique! After a failed attempt at trying to lasso a pontoon cleat where I wasn’t quick enough at pulling in the slack and the line slipped off, I managed at the 2nd attempt. Sure enough, what I had read was correct – putting the boat in forward gear at low revs, the boat gently came to rest on the pontoon.

It was a bit gloomy when I set off for Tarbert and crossing Inchmarnock water it didn’t get any better. There was a decent SE blow and I got the sails out until the wind died rounding Garroch Head – it was a sail nonetheless. It cleared up as I was approaching Tarbert and I arrived in glorious sunshine. I had intended to take a walk up to the castle which offers great views across Loch Fyne but I suspected that one of my bilge pumps wasn’t working and as I had a spare I set about replacing it instead. 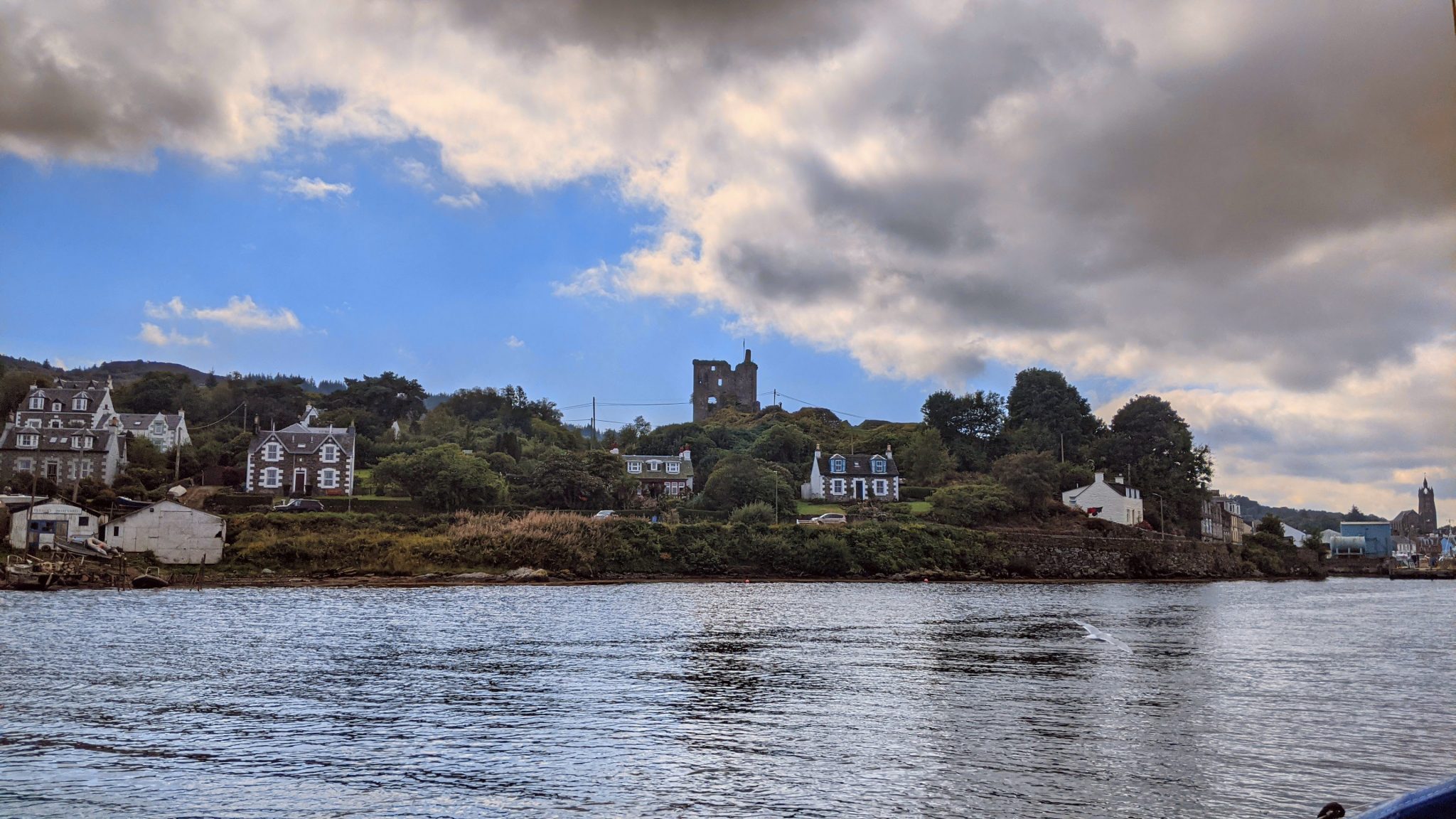 As I left Largs another boat “Emili” was also leaving, I managed to take a photo of her whilst she was sailing. The skipper saw me doing this and reciprocated. Through various hand gestures I told them I was making for Tarbert, they for Portavadie. I met them in the Islay Frigate (they had taken the ferry across) and we exchanged photos – it’s always good to get a photograph of your own boat sailing!

Again, it was a bit gloomy the next morning as I made my way north up Loch Fyne to Otterferry, but it cleared quickly and turned into the most wonderful day. I intended picking up a mooring and stopping there overnight. Despite its name, it has nothing to do with the soft, silky, elusive sea mammal, but is Gaelic for “a promontory of land” and there is indeed a spit that stretches out from the shore into Loch Fyne for nearly a mile. The spit dries at low tied and whilst at high water, it looks an inviting shortcut, you’ll be high and dry before you know it. The end of the spit is marked with a large concrete channel pillar. It was an absolutely beautiful afternoon and evening on the mooring and I sat in the sunshine and was treated to a wonderful sunset. 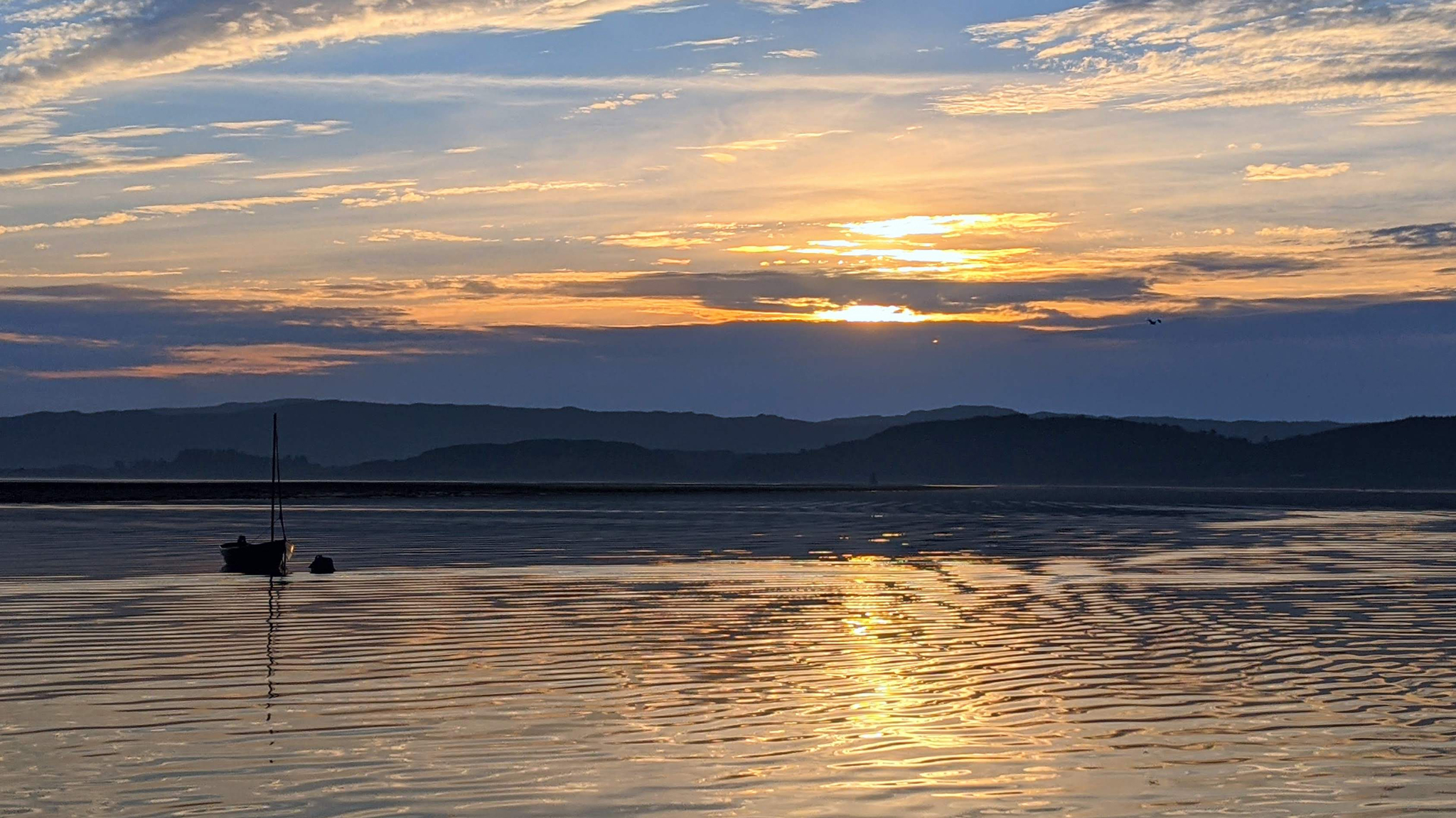 It was back to being a bit overcast when I set off for Portavadie on Thursday. One of the great things about being on a mooring (or at anchor) is that there is no faffing about when you leave. Just slip the line or lift the anchor and you are off! I was in absolutely no rush with just over 10 NM to cover so a slow motor down Loch Fyne. When I got into the marina there were a couple of fingers free and (although I say so myself) I made the perfect entry and tied up without a problem. Unfortunately, I hadn’t noticed that there was a “reserved” sign on the finger, and with the help of the harbour master I moved down a couple of fingers. The restaurant, in fact, the whole place, is a bit pretentious and in many ways, now that the toilet block has been upgraded, Tarbert is s better place to go as you are not a captive audience and there is competition for your custom. But, I wanted to have a neat wee “round trip”. Despite my misgivings, I went to the restaurant for a couple of beers and a very expensive burger and chips!

It was a return to Largs the folowing day, but I had decided to take to the Kyles, mainly because it has been ages since I have gone this way and it really is a picturesque trip, especially at Burnt Islands at the top on the Kiyles. There are two channels through to get from the West Kyle to the East, one, the main channel which is used by most and larger boats and ferries. There is also a smaller channel to the west which I have never used. I had been following a yacht and I could see that it was about to take the narrow/shallow channel so I decided to follow. The channel turned out to be well marked and with plenty of water. As I was passing Rothesay a wind got up and I managed to sail the last part to Largs.

My mooring was less than perfect, not down to the technique, which works perfectly, but down to a large bolt at the end of the pontoon where the line got snagged and I was unable to pull in the slack line and resulted in me having to bump the pontoon and hold the bow of the boat against it. Needless to say, the offending bolt was removed immediately after mooring!