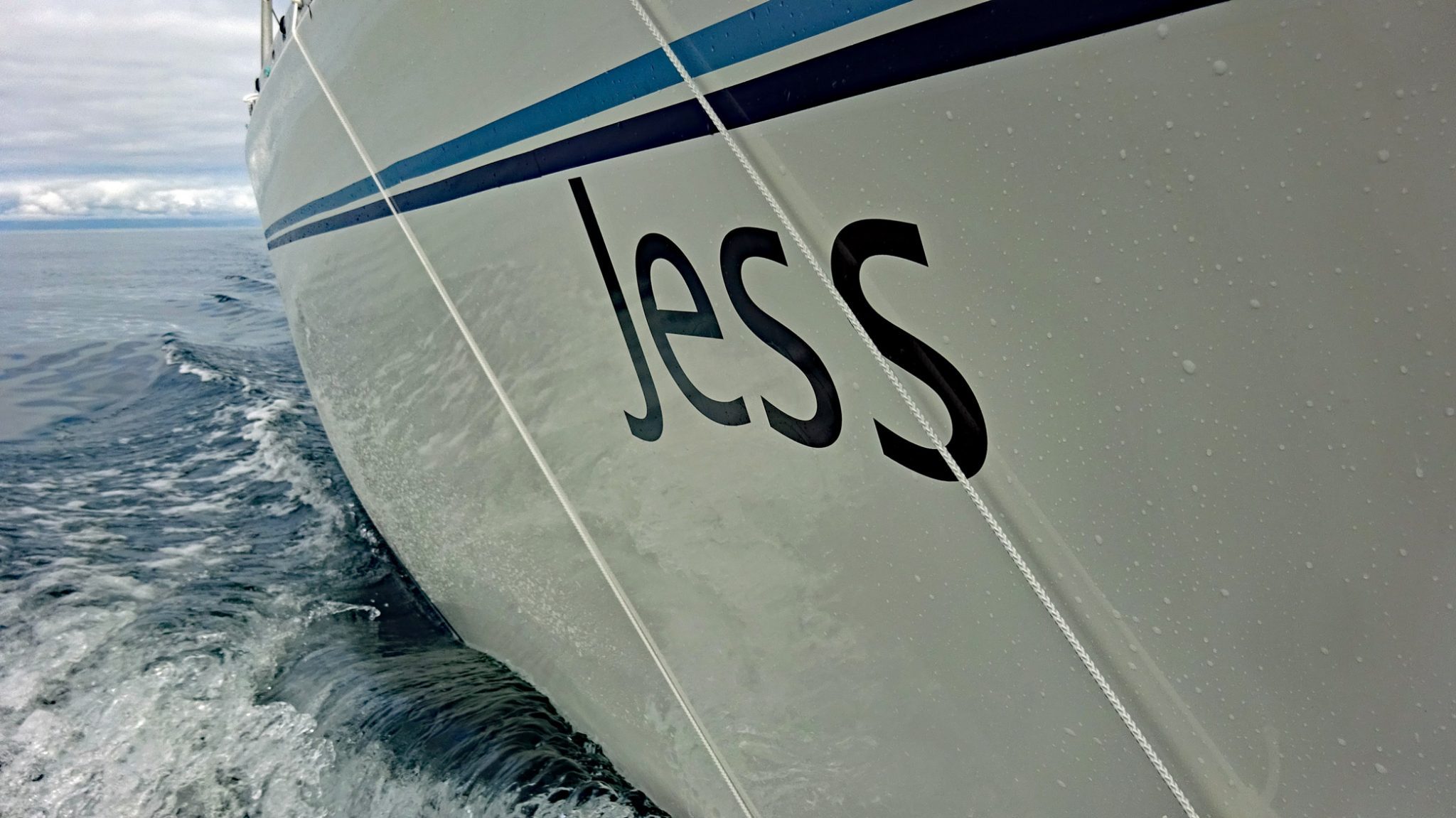 It’s just under 50 NM from Lamlash to Glenarm in Northern Ireland and would take us around ten hours to get there. We left the moorings at Lamlash just after 0700 and had a very pleasant crossing of The North Channel, mostly in sunshine. We had the sails and this did help us push on a little faster than the five knots that I plan for so we made good time and arrived in the marina just before half-past four. There’s not a great deal in the distance between Lamlash to Glenarm and Lamlash to Ballycastle on the northern coast of Antrim, but since we wanted to head south, it made more sense to head for Glenarm. The town, probably no more than a large village, to be honest, is a great wee place and we have always had a warm welcome from the harbourmaster. The marina is quite small but when we arrived we saw that a new length of pontoon had been added which would increase the space for visiting boats.
As there are no places to eat in Glenarm, we had our tea on board and then headed for one of the two pubs in the town. I say that there are no places to eat, but apparently, you can order a takeaway from a restaurant in the next village and have it delivered to the pub. We had an early start the next day in order to catch the tidal streams going south.

The tidal streams along parts of the Antrim Coast can run at over four knots during spring tides and it makes sense to use them when you can to cut journey times, and save fuel. As very little wind was forecast it was obvious that we were going to have to motor and using the tides would cut the amount of fuel used. We left Glenarm just after 0630 and covered the 32 NM in just over five hours. We left in sunshine but we soon found ourselves in thick fog. I don’t have radar nor do I have an AIS transponder. AIS – Automatic Identification System – displays other ships close by, but only in they are also registered and using AIS. Whilst not having a dedicated system, I do have web-based AIS and this works well – as long as you have a phone signal. I also have a device called “Sea Me” which enhances the radar from other ships. However, it was very quiet and the fog had lifted by the time we made our way up Belfast Lough, and we could easily see ferries and other traffic.
In previous years we have made for Bangor on the south side of Belfast Lough, but in June on the way through the Crinan Canal, I got talking to the owner of another Moody who was transiting with us. Turns out he was from Carrickfergus and suggested that we might go there instead. We were planning to visit Belfast for the day and like Bangor, there was a good rail link and the station was fairly close to the marina so we headed for Carrickfergus. The marina was surrounded by very new developments of flats and apartments and looked really good, reminding me a bit of Portavadie.

There is a marina in The Titanic Quarter, Belfast, which we looked at a couple of years ago when we went to visit the exhibition. It’s quite a way up Belfast Lough to the marina and it’s quite busy with traffic and we have preferred to get the train and at £9.60 for return tickets for both of us, it’s a no brainer as it would probably cost more in diesel. We have taken the open-topped bus tour and I would thoroughly recommend it, but this year we had decided just to make our way to The Crown Liquor Saloon for lunch and a couple of pints in magnificent surroundings.
The Crown Bar is one of the most famous pubs in Belfast. Known as the Crown Liquor Saloon, it was originally a Victorian gin palace. Having been sympathetically restored by the National Trust, it remains an icon of Belfast city. Alan had booked us a “snug” for the afternoon – wonderful!

Whilst the marina at Carrickfergus is wonderful and modern – and astonishingly cheap at £29 for two nights including electricity – I don’t think we will be returning. It’s a bit run-down away from the marina and having talked with a few of the locals, I felt quite uneasy about the town.
We headed back to Glenarm for the night before heading for Ballycastle on the North Antrim Coast opposite Rathlin Island. It is from Ballycastle that we will head back across the North Channel to Gigha.
The coast has been shrouded by fog and mist in the past few days and our journey north was no different. But, once again we made use of the web-based AIS and just kept a keen lookout.
We spent the evening in The Bridge End Tavern and had a great time chatting with Stevie the owner and the locals. The Coast Road Inn is just next door but I would recommend the Bridge End instead.

The tidal streams have been really good to us, which is just as well as there has been no wind!
Once again, we left and were soon surrounded by fog but by the time we arrived in Ballycastle, it had cleared and we arrived in glorious sunshine. The forecast for the next few days is really good, unfortunately, no wind is predicted so it looks as though we will be motoring to Gigha tomorrow and also the following day when we are making for Ardfern.
We are off to do a little local sightseeing today.