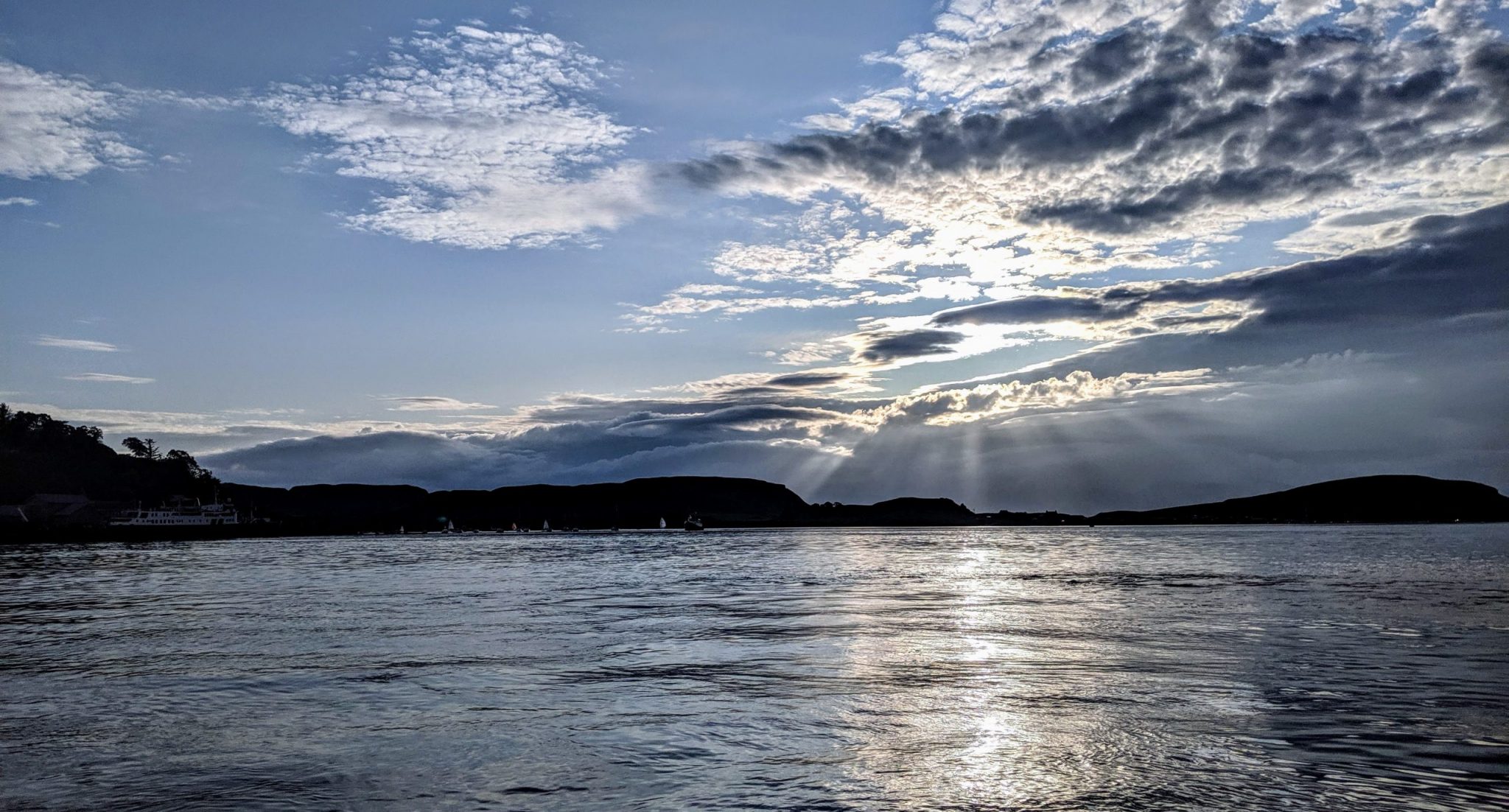 With the relaxing of Covid Regulations and most of the country being at Level 2, where we are allowed to stay overnight in another household, I had arranged with Alan to take a short trip around the Clyde to test and check equipment and gear on Jess before our extended trip to Kerrera, where I will be spending June and July before returning to the Clyde, via the Crinan Canal, in mid-July.

Our plans were fairly flexible with the options of Lamlash or Lochranza on Arran, Tarbert, Otterferry, Upper Loch Fyne, and The Holy Loch.  The weather forecast was looking OK, if a little cold, so we would make decisions and plan each day.

We set off just after lunch and made our way southwest toward Cumbrae Sound. With a fairly steady NW, we were making good progress and thought that Lamlash might be a better option than our original plan of Lochranza. However,  on leaving the shelter of Little Cumbrae, the wind changed and we went with our original plan of Lochranza for a night on a mooring. Lochranza is a great spot, once a herring fishing port it’s now geared up more for tourism and a geology field study centre. A 16th Century castle is situated at the head of the loch.  We had managed a bit of sailing, some motor sailing and some motoring – a great day which ended with a glorious sunset.

The following morning we had planned to make our way up Loch Fyne and spend lunchtime on a mooring at Otterferry and perhaps spend the night on a mooring and heading for Tarbert on Wednesday. There was a good westerly and we started off well with some motor-sailing.  About an hour into the trip, I went below and there was a strong smell of diesel. I removed the engine cover and could see that there was a small but steady drip coming from the fuel filter housing. At the last service, the bleed screw had to be re-tapped but I couldn’t quite see where the fuel was coming out. It looked like it was from the fuel line at the top. We decided to make for Portavadie where I would give 360 Boat Services a call. Part of the aim of this trip was to iron out any issues before our trip to Kerrera. We decided that it might be best to spend the night in Portavadie and then head straight back to Largs where it would be fixed. There wasn’t much else we could do – so we went for a pint!

The following morning I checked the engine and laid down some diesel soak mats in the bilge under the engine. I cleaned the front of the engine from as much fuel as I could and had another look to see if I could find where it was coming from. I thought perhaps it was the filter itself and I managed to hand-tighten the filter a little more and after cleaning the top of the housing I could see that the fuel was seeping from the bleed screw. During the last service, the screw had stipped and was re-tapped. I was nervous about perhaps stripping it once again but I tentatively gave the screw a turn by between an eighth and a quarter. I cleaned the area once again and waited. It seemed to have stopped so we started the engine and waited once again. It looked OK. We felt that we had nothing to lose by heading to Otterferry for lunch with me checking the filter at regular intervals. If things worsened we could just head for Tarbert and find a marine engineer. But, by the time we reached our destination, the seeping seemed to have stopped.

West Otter Ferry was not named after a cute furry animal. Its name, however, does provide a clue to the site’s use. West Otter Ferry was the western side of an ancient ferry crossing Loch Fyne from Cowal to Argyll. The name comes from the Gaelic word “oitir”. This refers to the sandbank on the eastern shores of the ferry crossing. Extending for a mile into the waters of Loch Fyne, you can now see it marked with a beacon as a warning to todays’ sailors.  The “Oystercatcher” is still on winter hours so we picked up a mooring and got lunch ready. It was flat calm so we got the outboard onto the dinghy and I tested it out!

I checked the engine after lunch and things looked OK so we set off for Tarbert where we would spend the night.

There have been some terrific improvements to Tarbert Harbour in recent times, particularly with the building of a new shower, toilet and laundry block – financed with the help of EU money (that’s not going to happen again). It has a number of advantages over Portavadie just across the loch – it’s cheaper for a start but you also have shops, pubs, cafes and restaurants that are not available in Portavadie – don’t get me wrong, I do like Portavadie and it’s a great place to take anyone who has never been sailing before, but I prefer Tarbert. We enjoyed the early evening in the “Corner House” and had a great time chatting to the locals. Tea was from the chip shop!

We had spent some time in the pub looking at the weather for Thursday and Friday and it really wasn’t looking that good with rain and very high winds forecast. It would be wise to curtail our trip and our planned visit to The Holy Loch and head straight back to Largs. I went to check the engine and was dismayed to see the matting soaked with diesel, but everything around the filter seemed fairly dry. I was confused until it dawned on me that this was fuel that had dripped down below the engine and had been sloshed forward during the trip from Otterferry. I cleaned it up and laid some more matting down.

Even with an early start, it would be likely that we would arrive in high winds. About an hour out of Tarbert it was clear that progress was going to be slow with the wind right on the nose at 25 knots. A quick change of plan and we headed for The Kyles of Bute. The journey would be longer but much more sheltered and we might even be able to make up some time as we would be sailing and going faster. The wind had picked up steadily throughout the day and by the time we were approaching Largs it was a constant 40+ knots gusting in the high 40s and above. However, the sea state was good considering the strength of the wind and I got the mainsail down and we motored into the marina in strengthening winds. Largs Yacht Haven is pretty sheltered but the worst wind direction for causing problems is a wind from the east, and that’s exactly where it was coming from at nearly 50 knots. Mooring wasn’t textbook or elegant, but we managed to get Jess in and tied up safely.